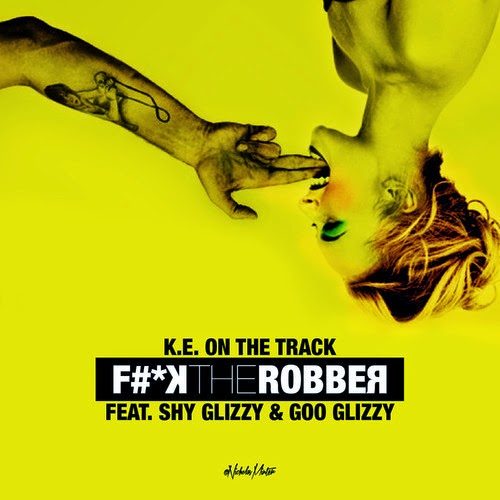 Listen to the Song Below
K.E. On The Track - Shy Glizzy & Goo Glizzy – F*** The Robber
After teaming up with Rich The Kid for “Getting To The Money” a week ago, K.E. On The Track is back with another new joint and this time he has the Glizzy Gang join him. Here is the world premiere of the producers latest single titled “Fxck The Robber” that features Shy Glizzy and Goo Glizzy. This is hard.

Kevin Erondu,[3] professionally known as K.E. on the Track, or simply K.E., is an American record producer, investor, and businessman from Tampa, Florida. He has produced for many major artists such as Nicki Minaj, Rick Ross, DJ Khaled, Future,Gucci Mane, Chief Keef, Ace Hood, Roscoe Dash, Bobby V, Tamar Braxton, Lecrae and Kid Ink, among others. Besides music, K.E. is also a businessman and investor. His business and investment ventures include a car rental company, a shoe store and stock market investments.[3]

Career
K.E.'s breakthrough came in 2009, when he produced the single "Swag Surfin" by rap group Fast Life Yungstaz.[1] The song received airplay and charted at No. 62 on the Billboard Hot 100.[4] Following the success of the record, he met a lot of important people in the industry and went on to work with other major artists.
In 2010, he worked on rapper Roscoe Dash's debut album Ready Set Go!, where he produced 5 of the 9 songs, including both singles. "All the Way Turnt Up" was released in January 2010 and peaked at No. 46 on theBillboard Hot 100.[5] It spawned multiple remixes by artists such as Ludacris, Fabolous and MGK. K.E. also co-wrote and produced the second single "Show Out", released in August the same year.
In 2011, he produced the song "You the Boss" by Rick Ross and Nicki Minaj, which was originally released as the first single from Ross' fifth studio album God Forgives, I Don't.[6] Eventually the track was taken off the final tracklist, even though it peaked at No. 62 on the Billboard Hot 100. It was also placed at No. 33 and No. 37 respectively on the Billboard Year-end charts for Hot Rap Songs and Hot R&B/Hip-Hop Songs.[7][8]
In 2012, K.E. worked with Future on his debut album Pluto. K.E. produced the song "Magic," which appeared on Future's 2011 mixtape True Story and its remix with rapper T.I., which was featured on the album. "Magic" was released as the second single from Pluto in January 2012 and peaked at No. 69 on the Billboard Hot 100. Later in 2012, K.E. produced the track "I'm So Blessed" (featuring Big Sean, Wiz Khalifa, Ace Hood and T-Pain) fromDJ Khaled's sixth studio album Kiss the Ring. After Khaled heard K.E.'s production on "You the Boss," he contacted him to get some beats and created the song, which made the cut for the album.[3]
As a lead artist, K.E. has released a number of instrumental mixtapes in the Hip hop, trap and EDM genres, such as The Art of Trap, EDM Nation 1 & 2 and the Best Beats in the World series.[9][10]
In November 2012, K.E. stated he was working on Future's second album, as well as tracks with Young Jeezy,Eminem, French Montana and Kirko Bangz.[3] In December 2013, the lead single from Rick Ross' Mastermind"The Devil Is A Lie" was released crediting K.E. as the song's producer. However, this would result in controversy as an upcoming producer claimed that K.E. had stolen his producer credit. In January 2014, K.E. leaked a song named "Rocky", which was produced by him and performed by Future. The rapper revealed via Twitter that the song had been recorded three years prior, and dissed K.E. for releasing the track without his consent.[11][12]
Read More
http://www.rapswag.com/2014/07/25/audio-k-e-on-the-track-feat-shy-glizzy-goo-glizzy-fxck-the-robber/